It’s unmistakeably that time of year again. The nights growing longer; the morning’s are getting colder (or it seems so to me); and Christmas adverts have started sneaking their way back onto our television screens. It can only mean one thing…

Without doubt the best holiday of the year excepting Christmas. I prefer Halloween, despite its pretty much purely capitalistic bastardisation of the pagan festival, to even my own Birthday – don’t get me wrong, birthdays are great, but I’m the type who prefer’s giving presents to getting them. A fact which makes Halloween therefore, THE. PERFECT. HOLIDAY., particularly now I’m (apparently) too old to dress up myself.

So to ring in the most fun-filled/annoying evening of the year (depending on your personal perception), I thought I’d make a list of my favourite Halloween-based advertisements in all their spooky glory. Some are scary, some have a twist, and some… well some are just laugh-out-loud funny so keep scrolling, and if you feel so desired at the end, leave a comment. Who knows, maybe I’ve missed a cracker out there that needs to be added.

10) (1960s) Sugar Rice Crinkles ad features a vintage circus clown that is far too reminiscent of 1990’s psychological horror film ‘It’ for my liking.

9) Axe’s 2011 ‘Horror Thriller’ ad features all the best references to the genre before ending with ‘The Axe Effect’ splashed across our screens after the ad shows that even the walking dead come out smelling great with Axe Effect. Bit cheesy but a nicely creative idea.

8) DDB published this ‘Happy Halloween’ ad in the Philippines for STP Oil. I just love how simplistic yet effective this it is – something that often attempted for the occasion but hard to achieve in the print medium without appearing contrived.

7) Dirt Devil ‘The Exorcist’ is a legitimately creepy parody ad directed by the much acclaimed Andreas Roth. What makes it even better is that it has an extended version. All the more awesome cinematography to swoon over before the brilliant twist at the end.

6) One of Phones4You’s 2011 ads was almost censored after the Advertising Standards Agency received 260 complaints saying it was ‘too scary’ and the use of a little girl was ‘inappropriate’. Luckily it stayed on our screens and the “Missing our deals will haunt you” campaign remains one of my personal favourites.

5) Dulux’s ‘Wash and wear’ ad is my partners favourite (albeit only due to his love of the brand’s mascot and Old English Sheepdogs in general), but the funny twist at the end definitely ranks it up there in my top five.

3) ‘Take this Lollipop’ by Jason Zada won twenty-three awards including an emmy. The 2011 interactive horror short film and Facebook app used the Facebook Connect application to bring viewers themselves into the film, and underscores the dangers inherent in posting too much personal information about oneself online.

2) The 2006 US ad for Snickers with the baseline: ‘Its what you would want’ was created by TBWA\CHIAT\DAY and won a Golden Lion at the 2007 Cannes festival. I’ve shared my two favourite examples, but there are more scattered about the internet should you want to check them out. 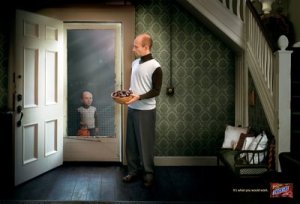 1) Nike’s: ‘Run for your life’. This ad for me epitomises a great Halloween-themed campaign. Brilliant concept that ties clearly into the brand identity and reinforces its values without detracting from the creative offering. LOVE IT